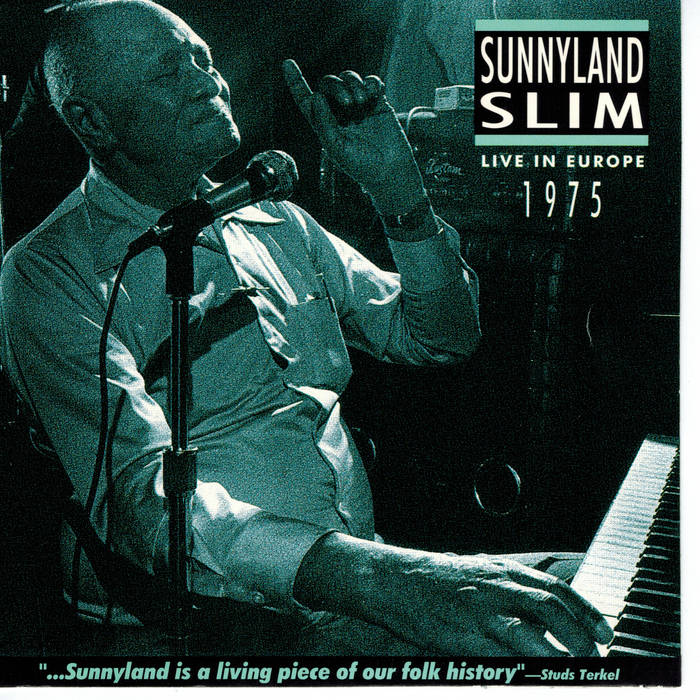 These sides, recorded at Caphörnli in Grenzach, Germany, on April 23, 1975, present an intimate look at on of the world's foremost blues musicians at the peak of his form. Sunnyland Slim is among the most recorded of all Chicago blues artists. He has played a major role in shaping modern blues piano, and at 84 he continues to perform. But seldom has he been caught like this, in a solo setting, playing a good piano before an attentive and appreciative audience.
Sunnyland was born Albert Luandrew near the town of Vance, Mississippi on September 5, 1907. Early on he absorbed the songs and hollers of his neighbors working in the fields, and he learned spirituals from his minister father and his congregation. Relatives and a kindly neighbor lady named Miss Pankey, who had an organ in her home, encouraged him to learn the rudiments of the keyboard.
Albert's mother died when he was young. Unhappy with the treatment he received from his stepmother, the boy ran away from home several times. Finally, he broke free for good. It was a dangerous world for a youth stealing away alone over those treacherous Delta fields, but he learned rapidly to live by his wits. He insinuated himself into the work gangs on the levees and in the fields, and began concentrating harder on playing music.
He played for a juke in Lambert, Mississippi, called the Hot Shot Lounge; he played piano accompaniment at a movie house, during intermissions, while the reels were being changed; and he broke into the local Saturday night party circuit. A chance encounter with pianist Eurreal "Little Brother" Montgomery at a saw mill juke near Canton, Mississippi
in 1923 further inspired him to make music his career.
Soon a personal style began to emerge––a driving, percussive piano technique, embellished with sparkling treble cascades and driven by a powerful bass line that alternated between boogie-woogie and sparse, strategically placed accents. His burgeoning success led him to Memphis, which remained his home base until he moved to Chicago in the 1940s.
It was near Memphis that Albert witnessed the tragedy that gave him his stage name. The Sunnyland train, which roared along the old Frisco Road between Memphis and St. Louis, killed two families within the course of a week. Haunted by that nightmarish image of death and destruction, he wrote "Sunnyland Train"––O–o–oh, I thought I heard that mean ol' lowdown Sunnyland blow." It became his theme, and he soon took the train's name for his own.
But he brought more from the blood-stained tracks of the Frisco Road than a signature tune and a clever nickname: "You got a tender heart in your body," is how he put it years later. "Seein' those little white kids and black kids killed––that rested on my mind and it given me a tender heart."
About 1943, Sunnyland hit Chicago. A gregarious and fiercely determined man, he quickly worked himself into the company of Chicago's blues elite––John Lee "Sunny Boy" Williamson, Big Bill Broonzy, Roosevelt Sykes, vocalist Peter “Doctor” Clayton, and their contemporaries. In 1947, not long after Clayton’s death, Sunnyland cut his first sides, on Victor, as “Doctor Clayton’s Buddy.” Later that year, now recording under his own name, he sent for a young guitarist named Muddy Waters to work with him on a session for Aristocrat (soon to be Chess) Records, owned by Phil and Leonard Chess. That session resulted in “Johnson Machine Gun,” one of Sunnyland’s most powerful blues; it was also Muddy’s introduction to the Chess brothers––a relationship destined to revolutionize American popular music.
Sunnyland never attained the glory of some of his protégés, but he never stopped hustling. With a physical constitution that even decades later would astound doctors (“You got the heart of a go-rilla!” he recalls a physician telling him), he poured his energy, talent, and enthusiasm into maintaining his career––over 200 sides as both leader and sideman, countless live gigs––while augmenting his income through a variety of endeavors. These ranged from freelancing as a barber to more conventional dodges like gambling, moonshining, and running an after-hours club. In the 60’s new horizons opened, as a generation of white music lovers discovered the blues and began hiring veterans like Sunnyland to play in venues on the north side of Chicago, at folk festivals all over America, and eventually in Europe.
Today, at 84, Sunnyland is the reigning elder statesman of Chicago blues. He has received awards from the National Endowment for the Arts, the City of Chicago, and others; he’s been featured on the cover of newspapers, international blues magazines, and, of course, numerous record albums. His recorded legacy is monumental, and the life force that burns within him is one of the wonders of the blues world.
This recording documents a historic first encounter, the initial meeting of Sunnyland Slim and Sam Burckhardt. Sam plays drums here; most folks in the U.S. know him as Sunnyland’s sax player.
But the story of Sunnyland and Sam is much more than a tale of musical collaboration; it is, quite simply, a love story. This unlikely pair––the gruff, tender-hearted giant from the juke joints of America and the hip young aficionado from Basel, Switzerland––share a friendship that’s a spontaneous and mutually sustaining as it is rare.
Sam met Sunnyland for the first time about 24 hours before this session was recorded. At the age of 17, still a high school student, he was 50 years younger than Sunnyland. With characteristic perceptiveness, Sunnyland proclaims during his performance that the young drummer has already “kind of got into my life.” Already you can hear the synergy, the uncanny instinct with which they think and play together.

The music speaks for itself, but listen especially for the effortless elegance with which Sunnyland switches rhythm and melody lines from the left hand to his right and then back; the cascading treble flurries; the force of his voice, which some claim used to shatter microphones; the propulsively swinging bass lines and the dancing, subtly complex upper-register explorations.
And finally, listen to the easy meld of deep blues passion and humor; note the generosity of spirit Sunnyland extends to his audience, to the musicians whose names he invokes, and to his new friend on the drums. Feel the strength and joy that flow through every note, the dedication he brings to his performance. This affirmation is his most enduring legacy––a gift from the powerful, tender heart of Sunnyland Slim.
––David Whiteis, 1991

Produced by Samuel B. Burckhardt
Recorded at Caphörnli in Grenzach, Germany on April 23, 1975 by Martin Läuchli
Mixed and mastered at ACME Audio and Recording Company, Chicago, by Paul Smith
Design by Beth Strever
Photography by Marc PoKempner
Special thanks to Bill Dahl, Jim Rasfeld, Simon Tankard and Richard Wilson